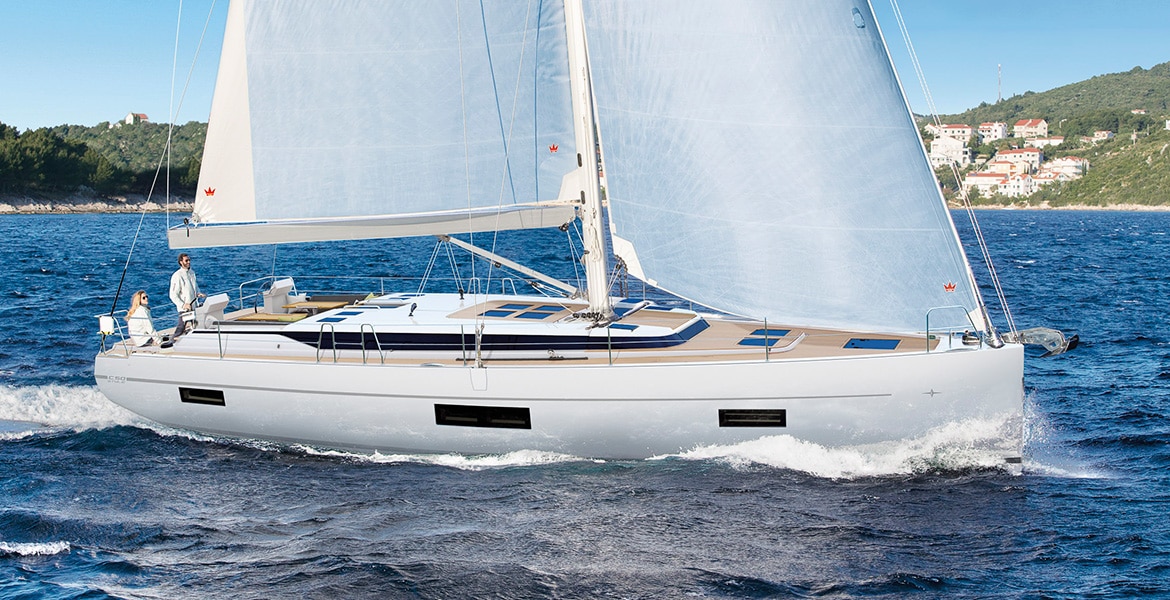 The C50 can be considered as the natural link between the C57 and the C45, a boat which preserve the majesty of the flagship as well as the freshness of the smaller model. With the breakthrough of the C57 in January 2017, there was the need to renew the sailing boat line as fast as possible, and this is the third model presented in one-year time.

A great effort has been done by our office and all people involved to be able to deal with two separate projects at the same time: in fact, the C50 project kicked-off one month after the C45 one.
The C50 is not just a simple combination of two models because every boat has her own personality. In fact, it can be noticed that even if there are clear connections with the bigger and smaller models, the design has been carefully developed to suite the different boat size. Like her smaller sister, the C50 has been designed in different style packages, each one with specific characteristics to fit each possible need of all customers.
The exterior design has been developed on the path of the C57 and the C45 such that it creates a family feeling for the entire C-Line.
The coach roof has been extended forward due to the necessary interior volumes and to create a connection between the flagship and the C45.
The natural consequence of this is that the front coach roof windows is moved from the saloon to the owner cabin, leaving the 180° windows a feature of the C57. Most of the time in a summer cruise will be spent above deck and, for this reason, it is important to have the chance to use it at the 100%: this is the reason why several sunbathing areas have been on top of the must list of the deck features. This differentiation gives the chance to experience the right level of privacy on deck deciding to enjoy a sunset laying at the bow, above the coach roof or staying in one of the two benches of the cockpit.
The cockpit is featuring all the bigger yachts characteristics to ensure the maximum comfort to the guest onboard: C-shape benches are designed to accommodate up to 10 guests and with the two split tables, one for each bench, there is a comfortable passage that runs from the stern to the companionway. The working area has been separated from the guest one, bringing all the maneuvers to the steering wheels: in this way the boat can be sailed even with a small crew. The steering position is designed to allow the helmsman to reach easily the two winches and the clutches both from the stand-up position and from the seated one.

On the back of the cockpit there is space for the wet bar that includes the cockpit fridge and the bbq.
The huge bathing platform and the easy access to the sea is one of the key features that Bavaria has always offered to its customers, and of course had to be included in the new model as well!
Even though the garage for the Williams jet tender was not a requirement, the chance to fit a normal dinghy was a must also for the C50. It has been decided for a transversal dinghy garage that can be accessed directly from the bathing platform. The deck plan in the holiday and style versions has been designed for the easy sailing, the deck has been developed to bring all the running maneuvers to the helming positions. The ergonomic has been studied very carefully, positioning each deck gear such that it is easily reachable from a stand up or a sitting position. The selftacking jib together with the mainsheet points on coach roof and the gennaker tack on the bow are the best choice when the cruising purposes comes first, on the other hand it could be choose the standard jib tracks on deck, the mainsheet point in the cockpit and the gennaker tack on the bowsprit when there is the need for performances.

Hull and deck are hand laminated. The hull bottom in the forward and central area is made of single skin laminate to withstand the high loads deriving from the slamming the keel and mast, and on the aft and the side it is made by a sandwich for the best weight distribution.
The longitudinal and transversal stiffness is ensured by the hull grillage and the side longitudinal stringer. In the midsection of the boat, where its connected to the hull liner and a transversal frame that runs up to the shroud’s chainplates. The deck stepped mast compression is transmitted to the hull bottom by a stainless-steel pillar connected to the hull structural inner liner.
The C50 has been designed for the Modutech system, the modular boat assembly introduced by Bavaria. The yacht structure is designed such that the interiors and systems can be assembled outside the boat and in a second moment could be installed in few steps inside the boat.

The 24 possible layout combinations make the C50 a suitable yacht for every need: in fact, it is possible to choose up to 5 cabins plus the skipper’s cabin at the front!
The basic layout is made of an owner forward cabin with a private head and two aft cabins, one of which can be considered as a real VIP cabin, with more interior volume and the lateral access to the bed. The two aft cabins may be considered as a standard and if there is the need for more cabins it is possible to have the twin front cabin or the bunk bed one on the central sections of the boat. If the twin cabin is chosen, there is still the possibility to transform the VIP cabin in an owner one, including the portside aft head and making it private.
The classical L-shaped galley is located on portside just below the companionway to get the benefit of the widest section of the boat.
The saloon is located between the galley and the main bulkhead. The big sofa with the dining table is located on portside whereas on starboard side there is the space for a real chart table and a lounge couch.
A significant importance has been given to the positioning of the windows, in fact each opening has been designed to be at the proper eye height in every situation, both standing up or sitting on the sofa or laying in the bed.
Due to the close relationship between the interior volumes and the hull shape a great effort has been done by all the team to fit all the requirements with the proper ergonomic in each environment. Thanks to the past projects experience it has been possible to squeeze every single centimeter to reach this goal.