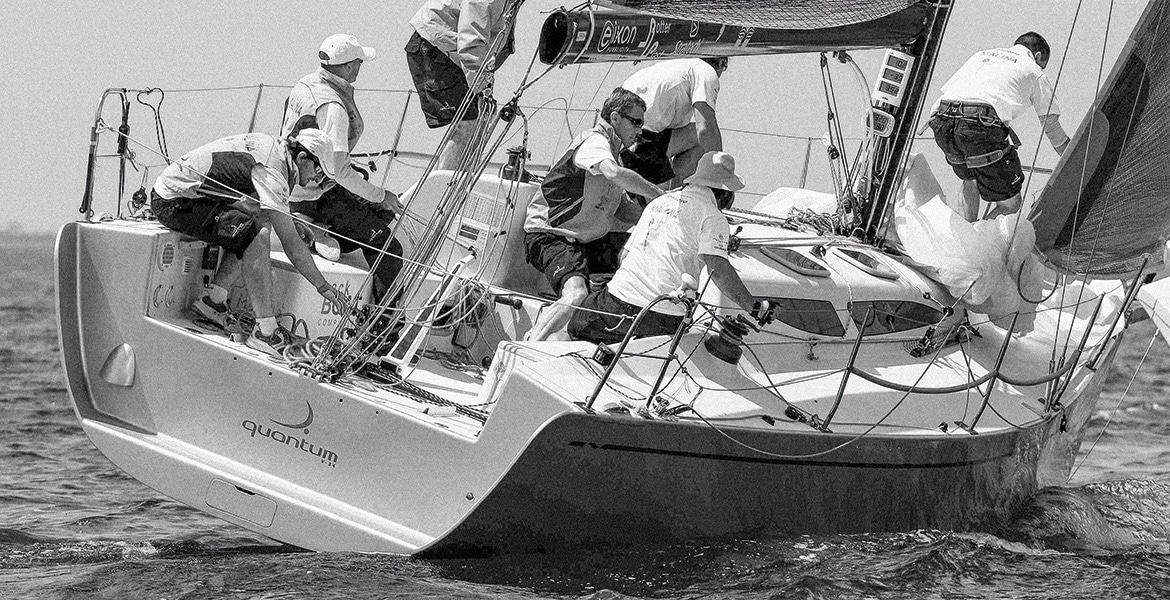 V34 Quantum was the second project after the V46 Belladonna, developed together with Vismara Marine, built by Marine Technologies in Villesse. She was created in the wake of the success achieved, in the last few years, by Cossutti and Vismara “fast cruisers,” with their excellent performance, eye-catching style with none of the extreme constraints imposed by IMS rating.

In particular the naval architecture was developed by Cossutti, as was the structural plan, while deck and rudder; internal layout came from Vismara offices in Viareggio. The essential lines of the project foresees a hull with straight buttocks and medium freeboard to increase the volume inside as well as seaworthiness, with a displacement of approx. 2.600 kg; a planing but “soft” hull. In particular it was carefully investigated the reduction of wetted area to maximize the performances in expected light-medium conditions in Adriatic Sea. Hull, deck and bulkheads were laminated in carbon and an epoxy resin matrix on a PVC core with differentiated densities, post-cured in a vacuum at 0.65 Atm at 60°C on male moulds. Particularly challenging was the main bulkhead just below the mast, with a big double door to allow for an “open space” visual effect, and all the compression stresses coming from the deck stepped mast supported by the full carbon upper part of the bulkhead itself. The sail plan features a deck stepped carbon mast with two angled spreaders in the bulwark. Originally designed for use of asymmetrical spinnakers fitted on bow, subsequently was fitted with a fixed carbon bowsprit, also allowing the use of big masthead “Code zero” drifters. The 28° angled spreaders mean it is possible to fit high roached jibs, despite limited to 110% overlap, overcoming the critical use of these sails in light wind conditions. The internal layout showed two “owner sized” cabins, one forward and one aft. Below the cockpit, port and starboard of entrance stairs there were a toilet and kitchen; in between a symmetrical dinette with big storage spaces below the sitting benches. The design is decidedly orientated towards integrating the structure and the architecture, where forms are dictated by function and the composite materials used are truly state-of-the art. Great effort was put in designing a modern, and minimal interior, but at the same time, warm and coloured and not too “cold” , mixing carbon look and yellow Kevlar panels, and bright red mattresses.