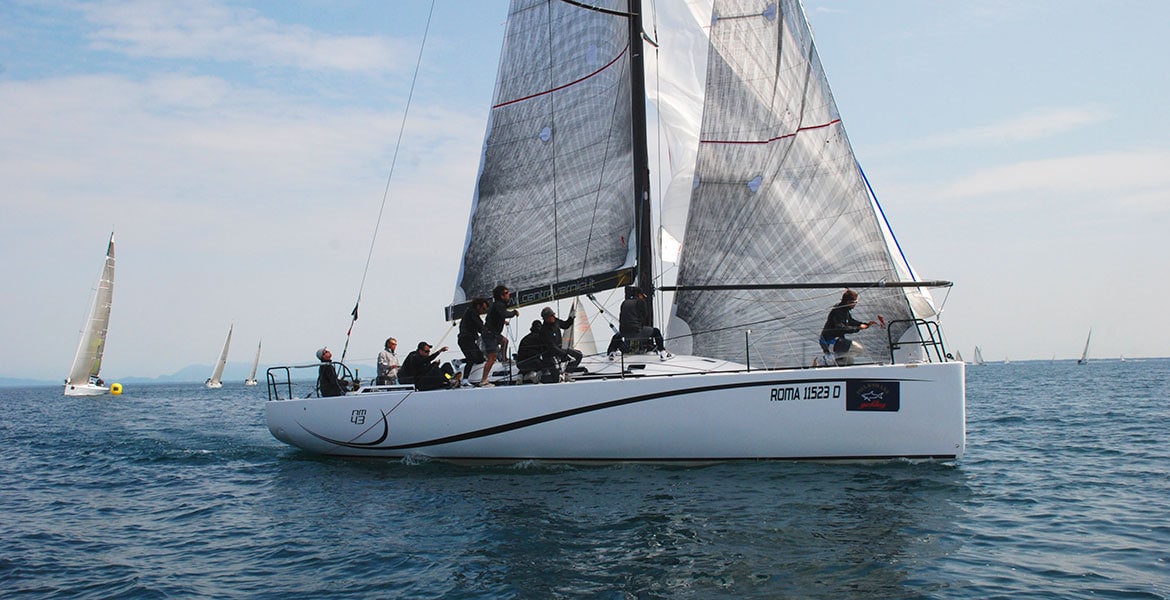 The NM43 was born from the meeting of Cossutti Yacht Design with Pino Stillitano, owner of shipyards Nautilus Marina of Fiumicino. The NM43 is a safe, comfortable and fast boat for cruising with the family and she also gives to the owner great feeling and high performance when racing.

Pino was a friend and our client since the times of the First 36.7. A long time sailor with experience of sailing around the world and passion for innovation. When Maurizio went out from 2M Marine, the first person who contacted him proposing a new project was Pino, and the boat would have been the NM43. The concept, in line with the ambitions to create something different, was an attempt to design a lightweight, carbon, modern boat, more similar to a Tp 52 than to the more traditional, heavy weight cruiser racers. The deck design was simple: a streamlined, rounded coachroof, with a big, wide racing cockpit aft. All on deck was racing oriented, from the 3 speed winches, to the essential deck hardware: less weight everywhere, for a boat that was more than 1 ton lighter than the competitors. In this line a carbon mast with PBO composite rigging, was chosen. Inside, all the furniture was in foam PVC sandwich, cladded with teak veneer. Hull and deck were built in carbon/foam/ epoxy sandwich, vacuum bagged and postcured at 80°. Also the structural bulkheads were similarly laminated, and glued to hull and deck. Besides all the structures were laminated directly in the boat with carbon fibres over pvc shapers. Keel and bulb were a monolitic lead casting, CNC machined to meet the design shape; the airfoil keel sections were also a custom design for the NM43, and were studied with CFD, to extract the maximum lift from the limited draft appendages. Rudder blade and stock were made of full carbon.

The interior layout was made of three cabins and two toilets, with a saloon resting area starboard and a linear kitchen to have more space to lay down the long jib bags in a central position during racing. During her racing career the NM43, originally named Black & White, was subject to several optimizations in appendages, stern profile and recently renamed “Il Moro di Venezia XXIII”; She is now rigged with a squaretop main and asymmetrical gennakers on bowsprit, as an offshore preferred configuration.