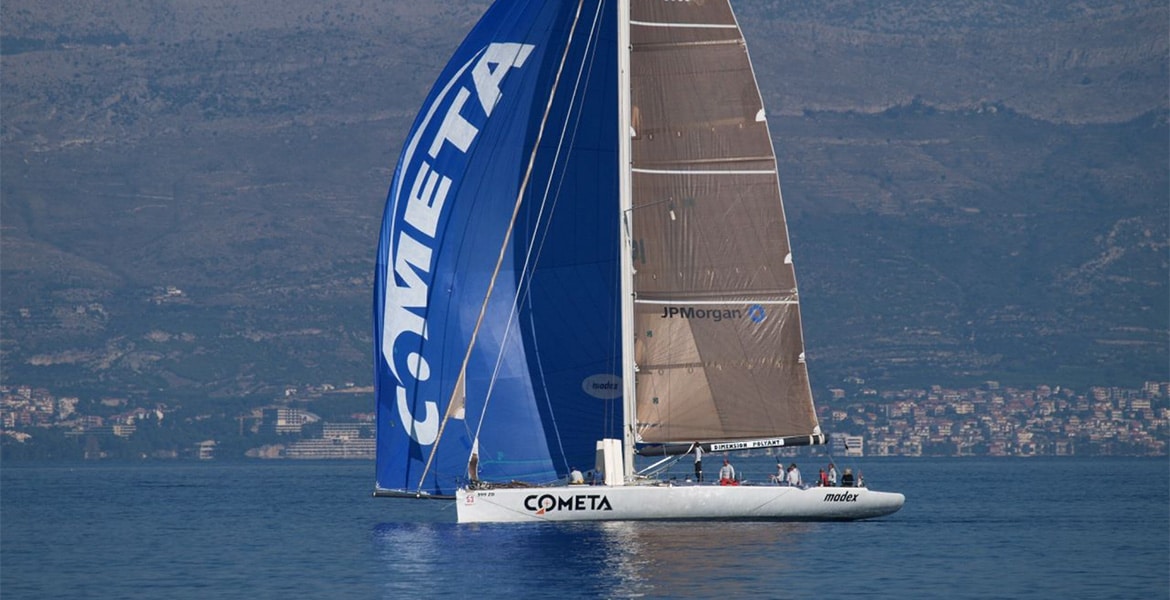 October 2001, a gloriously sunny day, with winds between 15 and 25 knots. It all comes good in the end for the Cometa Team as their Open Class 65 ft leades 1,968 rivals away from the start of the 2001 Barcolana Regatta in Trieste, setting a new course record.

Cometa came from Pfizer Pharmaceuticals, to take advantage of the great visibility offered by Barcolana’s unique show. The dream was to realise an innovative boat able to race not only the Barcolana, but also the Giraglia, Roma per Tutti and Middle Sea Race events. The guidelines were defined in December 1999, centred on a length of 65 ft, with the possibility of reducing it to 60 ft by trimming the stern scoop. Our usual Open class philosophy is to design light, heavily canvassed boats with high form stability. At the same time bow and stern lines are drawn quite harshly, producing a narrow bow entry and a wide lifting stern. During preliminary project phase we examined two designs: a “narrow boat” (with slim and slab-sided canoe body and wings to improve crew righting moment) and a “wide boat”, with the features more typical of our previous projects. In both cases we kept a canting keel, plus double asymmetrical canards forward, and a single rudder. After two months of detailed VPP comparisons, we opted for the most extreme of the “wide” hulls, 19.8 m long, with 5.4 m maximum beam and displacement at around 8,000 kg. From the beginning we were convinced of the superiority of the rotating wingmast over a conventional spar. Theoretical data validated by racing our 6.6 metres monotype Zero, and also our Open 35 in the 2000 Europe 1 Star, reinforced our choice. A mast of chord of 500mm and a width/length ratio of 48% gave the best lift-to-drag results for our purposes.

The original rig layout was free of any spreaders with only a single pair of runners positioned halfway between the forestay attachment and the masthead. We relied on the stiffness of the section to keep the luff of the Code Zero tight, without adding another masthead backstay. The mast was built in M40 carbon prepreg in a female mould, in two elliptical halves. A non-structural tail fairing completed the aerodynamic elliptical section. An innovative telescopic bowsprit system was fitted to the boat. The Code Zero was set with the tack 2 meters forward of the bow on a large carbon section, while a smaller carbon section could then be extended another 2 meters forward for the asymmetric gennakers. We made extensive use of CFD to balance the boat in several configurations. One of the central parameters of the project was to make the most of the stability of the boat, maximising sail area for optimum performances in the lighter winds characteristic of the Mediterranean. As a result the sailplan has a very big mainsail of 170 sqm, and a genoa of 110 sqm. The masthead Code Zero is 150 sqm and the asymmetrical spi 450 sqm. Marco Angeloni engineered both the spars and the primary structure. The hull and deck are in unidirectional carbon fibre, laid over a PVC core of varying density. A serious challenge was the canting keel, which also needed to be lifted to reduce draft from 4.4 to 3 m to enter port. Both the canting of the keel during sailing and the lifting of the keel itself were carried out by purchase systems driven by the primary winches. Launch was on schedule and first trials took place in September 2000, only a month before the Barcolana. Bad weather and some problems with the complex systems of the keel and mast allowed only a few days of training, albeit with a strong crew including guest star Luca Devoti, fresh back from winning an Olympic bronze in Sydney. Unfortunately, on the day of Barcolana 2000, a strong Bora was blowing at around 50 knots and Cometa broke her rudder stock just before the start. Though very disappointed, the Pfizer board decided to carry on with the project while reinforcing the technical management. During the winter of 2000-2001, under project manager Vittorio Volontè, and with the support of Giovanni Belgrano and Franck de Rivoyre for the mast, cometa was refined. One pair of rotating spreaders was added to the mast, in order to better support the high loads of the Code 0 sail. Also the keel lift system was abandoned, as it was considered superfluous. Cometa had her second debut at the Giraglia Rolex Cup in Saint Tropez, leading half of the race and finishing fourth due to halyard problems. At last she was back to Barcolana, with Flavio Favini at the helm, already winner of the IMS 50 Worlds on Brava, Cometa took the line honours in the biggest regatta of the world destroyng the race record.